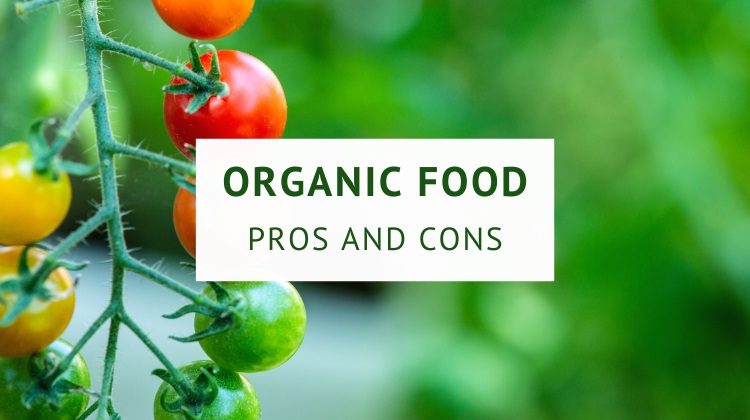 The organic food debate is surprisingly controversial, so I decided to explore the topic from both sides to help you make your own informed decisions.

The interesting fact is that the production of organic food has grown by about 20% every single year since the 1990s. Organic food is a hot topic, but it’s one that we are bound to be affected by in one way or another in the future.

What Is Organic Food?

The definition of the word organic varies, because each country has its own laws regarding the certification of organic produce.

Some laws also go as far as saying food should not be genetically modified, and specify the number of years the soil must have been cultivated organically.

Although organic food certainly has disadvantages, organic food is better in at least the following three aspects.

Eating produce that has been grown organically has been shown to contain more nutrition than conventionally grown produce.

Think about it this way. Land that is well taken care of will be able to supply plants with more nutritional value.

Food that has been grown organically tends to taste better than conventionally grown produce.

Tests have shown that organically grown apples tend to be sweeter, have a better texture, and have more crunch.

I’ve also noticed a difference in taste between organic and non-organic produce, to the point that I’d fly my carrot stick across town for organic produce.

Again, this comes back to the idea that organic soil conditions are more conducive to growing strong trees and plants.

An organic growing environment allows a wider range of insects, plants, and organisms to coexist naturally.

Conventional agricultural methods eliminate much of the diversity of living organisms that occur naturally in soils. Industrialized farming also focuses on growing one or two types of produce across a field, further reducing the diversity of plant life.

Diversity enables a more balanced and sustainable environment over the long haul.

Although there are many benefits to organic food, there are also disadvantages.

The main downside of organic food is the potential for a smaller yield. Some of the “potential” yield is eaten by bugs, lost to competing plants, or not able to grow without sufficient fertilizers.

Some scientists have argued that if the world were to convert to an entirely organic farming system, the yield of produce would be insufficient to support the world’s population.

Further studies have shown, in a comparison of the two agricultural systems, that organic farming would indeed be able to support the current world population.

If farmers from developing countries were to switch to organic farming, they could actually increase their yields. So what’s stopping them? They don’t always have access to manure to replenish their soils.

I have to keep reminding myself that “conventional” farming methods are actually quite recent in the history of agriculture. Organic farming methods were the norm because we didn’t have pesticides, herbicides, fungicides, and synthetic fertilizers.

Ideal Organic Environment for Your Food

In an idyllic world, everyone would have a magical garden big enough to sustain their families year-round. If you find such a place, let me know, okay?

Still, I like to believe that having your own garden is one of the best and easiest ways to increase your intake of organic fruits and vegetables.

As a private garden owner, I’ve had to make some choices about using pesticides and fertilizers in my garden.

I’ve chosen to let the bugs take a bite out of my produce because I don’t want the runoff from pesticides to kill fish in the surrounding lakes and rivers. In so doing, I learned some tricks to deter bugs that aren’t harmful to the environment or my family.

It’s important to wash non-organic produce carefully to get rid of pesticides.

Be sure to read my article about how to wash pesticides off fruits and vegetables for some practical tips in this regard.

Another option is to peel the skin off non-organic produce. This is very common in China, where the use of pesticides is rampant.

The downside is that much of the nutrition of a fruit comes from the skin.

Organic produce can cost between 10 to 40% more, so picking and choosing between organic and conventional produce is a good way to save money.

This list is also known as the “Dirty Dozen”. It has the 12 items that you should ideally buy organic. The other 12 items are those that you can buy conventional with minimal effects.

This list is based on the amount of pesticides and residues found on the fruit and is provided by the Environmental Working Group. (They also offer a downloadable pdf to bring shopping with you!)

In general, if I need to choose, I will pick fruits that are normally peeled as my conventional buys, like bananas, mangos, and avocados.

Here is EWG’s list of the 12 most contaminated non-organic foods in 2022:

As you can see, there are lots of popular fruits and vegetables on that list!

People who were at the forefront of the organic movement are now looking for something that better describes their ideology.

One way to get past this commercialization is to join a Community Supported Agriculture (CSA) program. You buy a “share” of the farm’s potential crops, and receive weekly or biweekly boxes of fresh produce.

CSAs allow the consumer to meet the farmers, see the farm, and know exactly how their food is grown. It also gives smaller farms a cushion if their yields aren’t the same from year to year.

As the laws surrounding the word organic continue to change, how will we, as consumers, stay informed? It’s something that’s on my mind and probably on your mind too.

1 Comment
Leave a Comment Cancel reply
Welcome to Healthy Food Tribe!
My name is Donna and with my blog I hope to offer you lots of tips and information about food, smoothies, kitchen equipment, and recipes.