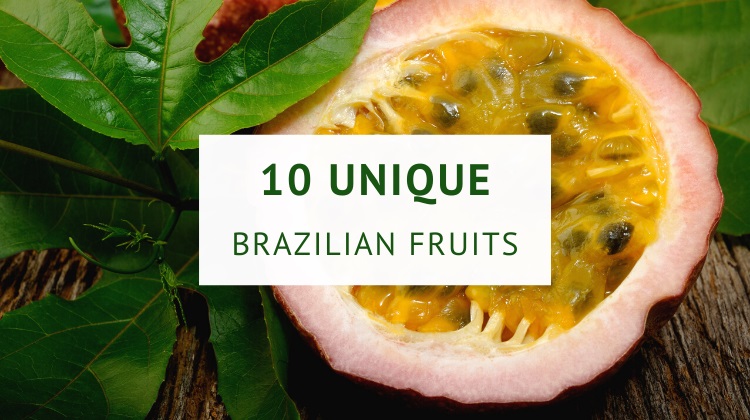 A list of 10 unique and delicious fruits from Brazil, including tips on how best to find, prepare, and eat them.

Given that it’s home to the world’s largest rainforest, it shouldn’t come as a surprise that Bazil also has a huge plethora of native fruits. Some of these are well-known state-side, and some you’ve probably never heard of before, let alone tasted.

Read on, as we’re going to have a closer look at some unique, some delicious, and some uniquely delicious Brazilian fruits!

In alphabetical order, here are 10 of my favorite fruits from Brazil.

Made popular in recent years, açaí fruit is most well-known as a health powder or supplement. This fruit grows on the açaí palm tree, which is native only to the Brazilian rainforest. In its whole form, the fruit looks like a shiny, dark purple blueberry, but the taste is not nearly as sweet.

The dark skin of the acai holds an immense amount of antioxidants and nutrients, which is one of the reasons it has become so popular. But the skin is also incredibly bitter and tart.

The white flesh inside this purple fruit is sweeter, tasting somewhat like a raspberry. But it is hardly sweet enough to overcome the tartness in the skin. This is why most people consume açaí with honey, in smoothies, or as a powder added to health drinks.

You’ve no doubt had a cashew before, but have you ever wondered what kind of fruit harbors that nut before it’s harvested? The answer is the cashew apple. This strange fruit looks something like an upside-down bell pepper and comes in shades of red, yellow, and orange.

Sticking out of the bottom end of this glossy fruit is the cashew nut. The fruit is much less sought after than the nut, but does have its own redeeming qualities. For one, it has a pungent, fruity aroma. This odor carries to its flavor, which is sweet and tropical, but also oddly vegetal and a bit astringent.

Imagine putting a bell pepper, mango, and a bit of sugar into a blender, then drenching that with bitter green tea. That’ll give you some idea of what this fruit tastes like.

The cashew tree, along with its apples and nuts, is native to Brazil. But is now grown across the world, from East Africa to Asia to Australia.

Champagne oranges are about the size of a navel orange but greenish-yellow in color. Like most citrus fruits, they are a hybrid.

It was created naturally from a cross between a Sicilian lemon and a Bahia orange. Given that these trees are found mainly on private Brazilian estates, we can imagine this hybridization occurred after a lemon tree was imported from afar and mixed with the Bahia, which has been intentionally grown in Brazil for hundreds of years.

The champagne orange gets its name from the light, champagne-colored juice it creates. The flavor is mild, with notes of lemon and vanilla.

Somewhere between a russet potato and a kiwi is the cupuaçu. This strange-looking fruit comes from an Amazonian rainforest tree closely related to the cacao tree. Cupuaçu trees grow throughout the Amazon Basin and can be found in Peru, Columbia, and Brazil.

Similar to cacao, the cupuaçu has a thick skin that peels away to reveal small fleshy sections of fruit. Each of these covers a large seed that can be cooked and processed into butter.

The flesh smells like a mix of pineapple, banana, and chocolate. But the flavor is much sourer, somewhat like an orange. Brazilians typically eat them fresh, with a bit of sugar, or processed into a powder and used to make desserts.

Possibly the most unique Brazilian fruit on this list, the guaraná looks like an eyeball and is most commonly used to make soda. As this red fruit ripens, the leathery skin opens to reveal a black seed covered in white pith (hence the eyeball look).

There is little edible flesh on the fruit, and the plant is most commonly cultivated for the seed, which has twice as much caffeine as coffee beans. In Brazil, as in Paraguay, the seeds are used to make soft drinks. Because the caffeine in guaraná takes effect more gradually, it is also widely used around the world in health-focused energy drinks and dietary supplements.

In the US, guaraná powder is approved for use as a food additive, but the seed and fruit still lack a “generally regarded as safe to consume” label. But don’t fret; Brazilian natives, especially the Tupi people, have been consuming and using this “fruit like eyes of the people” for thousands of years.

The jabuticaba has one major peculiarity that sets it apart from other fruits. This plump, glossy, black-colored berry grows directly off the trunk of the tree. The fruits are about the size of a large grape with thick skin and white flesh.

Jabuticabas are usually eaten fresh. They taste somewhat like a blueberry with some astringency and tartness coming from the skin. But these fruits only last about four days after harvesting, so they are often turned into jam to preserve them.

While it is nearly impossible to get these fruits outside of Brazil, they are worth hunting down if you find yourself in the area. That dark skin is telling of a high antioxidant load. The jabuticaba tree is native to only a handful of states in Brazil, making getting ahold of these berries that much more difficult.

This bright pink fruit has thick skin and dense, white pulp filled with hundreds of tiny black seeds. It looks similar to a dragon fruit on the inside and also grows from a cactus (cereus jamacaru). Unlike dragon fruit, the outside of this palm-sized fruit is smooth and unremarkable (aside from that vivid color).

The flavor is less pronounced than its better-known cousin, but it is still pleasantly sweet and slightly aromatic. Mandacaru is an excellent source of insoluble fiber, calcium, magnesium, and potassium.

It is most often eaten fresh, with the pulp being scooped out with a spoon. It can also be dehydrated and turned into a versatile and nutrient-dense flour. Given its limited commercial cultivation and preferred climate, it is mainly utilized by those living near the plants’ natural habitats.

As you can imagine, these cactuses do not grow in the rainforest. Rather, they are native to the arid regions of the country.

For those unfamiliar with this exotic treat, passion fruit looks something like a large purple or yellow plum and is filled with jelly-like pulp. Each slimy blob inside covers a small edible seed. The thick skin holds its shape and must be “cracked” open to reveal the sweet jelly.

With a mild flavor, somewhat like pineapple, kiwi, or pear, eating a passion fruit is an enjoyable experience, despite the texture. But the taste is not where the name comes from. It was European missionaries in Brazil who coined the term after using the fruit in their teachings to proselytize the indigenous tribes.

Passion fruit is very common in fruit markets throughout Brazil and South America. If you’re lucky, you can even find these in the exotic fruit section of your local grocery at certain times of the year.

The popular pineapple may look out of place on this list of unique and unknown Brazilian fruits. But we couldn’t cover the fruits of Brazil without looking at their national fruit. While we may associate pineapples with Hawaii (and many other tropical locations), the tasty pineapple is actually native to Brazil.

In fact, native Brazilians were cultivating these fruits as far back as 1200 BC. Columbus brought the fruit back to Spain in 1493. From here, it spread throughout the tropical regions of the world. Today, the most common cultivator is a strain known as Smooth Cayenne.

While this beloved fruit might be native to Brazil, the country now ranks third for pineapple cultivation, led by the Philippines and Costa Rica.

Also known as Surinam cherry, pitanga fruits are small berries that resemble adorable, colorful pumpkins. They are about the size of a large blackberry and come in a variety of colors, from yellow to black. Often, the color is indicative of the ripening stage, but this feature varies by cultivator type.

The darkest fruits tend to be the sweetest, while the lighter colors are very tart. Flavors can range from sweet and sour, like cranberry sauce, to earthy, like bell peppers or grass. They are most commonly eaten fresh or used as a flavoring agent. Because they have a short shelf life, they are also often incorporated into jams.

The shrubby trees they grow on are native to the east coast of South America. They grow in Brazil as well as Suriname, Uruguay, Paraguay, and Argentina.

The above ten fruits are just some examples of the many delicious and unique fruits that are grown and enjoyed in Brazil.

These fruits are popular in Brazil for a variety of reasons, including their taste, their versatility in cooking, and their nutritional benefits. Many of these fruits are also an important part of Brazilian culture and are often used in traditional dishes and drinks.

As a country, Brazil is known for its diverse climate and fertile soil, which makes it so perfectly suitable for growing a wide variety of fruits and veggies.

Some other popular fruits from Brazil include avocado, coconut, cashew, guava, mangosteen, papaya, mango, tamarind, and jaboticaba. So go ahead, and try some of these delicious treats!