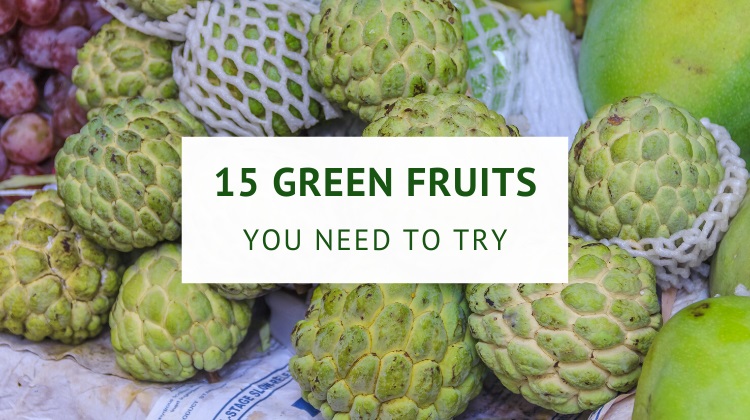 A list with 15 green fruits from around the world. Unique fruits with beautiful green skin, some quite familiar and others a bit more exotic.

Almost all fruits start off as green, but only a select few stay that way when ripe. And while green may seem a common color for fruits and vegetables, green fruits are more unique than you may think.

From the popular green apple to the obscure cucamelon, here are 15 of my favorite green fruits I think you should know more about.

Some of the below green fruits will look very familiar, and others you may have never heard of or seen before.

Although in the same family as melons and cucumbers, bitter melon has a look and flavor all its own. This odd fruit can be somewhat smooth with protruding bumps or covered in jagged teeth-like growths, depending on the cultivator. All start out deep green and ripen to yellow-green or orange.

Bitter gourd, as it’s known in some countries, originated in Africa but has since spread throughout the world. Most cultures utilize bitter melon in its green state. Here, it has a crunchy, watery texture reminiscent of green pepper but with a strong bitter flavor. Some varieties get sweeter as they ripen while others get more bitter.

These odd-looking fruits are often hollowed out and used in salads. They can also be stuffed like peppers or cut up and added to curries or other savory sauces.

Also known as a choko or mirliton, the chayote is another close relative of the cucumber and melon. It looks somewhat like a puckered pear with wrinkly, light green skin. The flavor, however, is much more reminiscent of cucumber or mild apple with a texture like jicama.

This fleshy gourd was first cultivated by Mesoamericans in Southern Mexico thousands of years ago. Today it is used in many of the same ways zucchini is. It can be spiraled into noodles, mixed into salads, baked, or used in soups.

When mixed with sugar or syrups, chayote takes on a sweeter vibe allowing it to be used alongside pears and apples in desserts. This fact once led to a rumor that chayotes were being used to replace apples in apple pies at fast-food restaurants in Australia. While this likely isn’t true, this versatile fruit certainly could be used for such a purpose.

Closely related to jackfruit, breadfruit has a similar look but with smoother bumps on the skin. It is also smaller with most cultivators about the size of a large grapefruit and the largest fruits topping out around the size of a football.

This native to Southeast Asia gets its name from its unique flavor, which is reminiscent of freshly baked bread. The firm white flesh inside will sweeten somewhat as it ripens while unripe varieties have a neutral flavor like a potato.

Both ripe and unripe fruits are typically cooked before use. They can be baked, fried, or boiled and are used in recipes the way starchy vegetables would be. They can also be fermented and mashed to create a less-perishable product known as mahr or masi.

Honeydew melons aren’t exactly green on the outside, but their strange muted green flesh still earns them a place on this list.

Like the closely related cantaloupe, these melons are most often enjoyed fresh in fruit salads or on their own. They have a mildly sweet flavor that is distinctly fragrant and somewhat earthy.

Originally from the Middle East, honeydews are cultivated around the world in arid climates with long growing seasons.

Despite knobby, scale-like green skin reminiscent of the dragon’s eggs from Game of Thrones, it’s the delicate flavor of the cherimoya that attracts the most interest.

When ripe, cherimoya has smooth, custardy flesh that tastes like strawberries, bubblegum, and pineapple. Native to Ecuador and Peru, this exotic fruit is hard to find in the United States, but worth the hunt. It’s best to not eat the seeds as they contain a neurotoxin.

Ripe cherimoyas are usually eaten raw, while less ripe varieties, identified by their bright green rind, can be cut up and used in savory recipes.

What is cherimoya fruit?
How to cut and eat a cherimoya?

Green papaya and orange papaya are not two different cultivators, but rather different stages of the same fruit. When ripe, the skin turns bright orange with slippery, sweet orangish-pink flesh inside. But in earlier stages, the unripe fruit is deep green with firm white flesh.

In this state, papayas have a neutral flavor similar to jicama. They are often used as vegetables in savory dishes. The raw flesh makes a great addition to salads, especially when julienned into shreds that can easily soak up the flavors of the dressing.

Papaya is originally from Mexico and Central America. Today, they are cultivated in many countries including India, Brazil, Indonesia, and Nigeria.

Grapes come in a variety of colors, but green grapes are some of the most popular.

There are a number of cultivator types that fall into this category from the ultra-sweet Cotton Candy to the very popular Thompson Seedless. All share similar features: a thin, light green peel, and juicy, sweet, slightly bitter flesh.

Green grapes, like other varieties, are native to the Mediterranean. They have been cultivated by humans for thousands of years. Green grapes are most often eaten fresh, but are also dried into raisins and used to make wine.

The kiwano melon is a strange spiky fruit with a thick rind and slimy, seedy pulp inside. It starts out a deep green color and ripens to orangish yellow. While it can be eaten in the green stage, it is most often used ripe.

While ripe kiwano melons, also known as African spiked melons, are not green on the outside, the flesh inside remains a radiant emerald color throughout maturity. This jelly-like flesh has a texture similar to passion fruit and a subtly sweet, cucumber-melon flavor.

Kiwano melons can be used as an ingredient in savory concoctions, such as salsa and salads, or as a sweet topping for yogurt and smoothies. They are native to the Kalahari desert in Africa where they are used by tribes as a water source during the dry season. Commercially, they are cultivated in New Zealand, with smaller operations in the United States and other temperate zones.

Limes, like most popular fruits in the citrus family, are a product of hybridization that has occurred throughout history.

Most cultivators share a common ancestor in the micrantha, a wild citrus native to the Philippines. Key limes, Persian limes, and desert limes are all separate species lumped into one group based on their thick green peels and sour taste.

Because they’re so sour, limes are typically used as flavor enhancers in dishes, both savory and sweet. Their juices add a tartness to drinks and sauces, while their rinds are zested for a unique sour flavor that comes with notes of bitter acidity.

The kiwifruit (often shortened to kiwi in America) is a small, fuzzy brown fruit about the size of an egg.

Below that thin hairy skin is bright green flesh dotted with tiny black seeds. While the skin is edible, most people peel the fruit to get to the sugary-sweet, slightly tart tender flesh below.

The vining plant these fruits grow on is native to China. Kiwis have been cultivated by humans as far back as the Song dynasty in the 12th century. These delicious fruits are most often eaten fresh and used to dress salads and desserts.

The osage orange is neither a citrus fruit nor, as its common name “hedge apple” would suggest, a type of apple. It is most closely related to mulberry, though this bumpy, green, brain-like fruit looks nothing like a berry. In fact, its “multiple fruit” form would put it in a category closer to a pineapple than anything.

In terms of uses, this unique fruit is rarely eaten. In fact, not even animals seem keen on adding it to their diet. A combination of woody pulp and bitter latex sap makes this more a decorative fruit than anything.

The osage orange tree is native to the south-central US where it is grown as a wind block and for its dense, workable wood.

The noni, also known as beach mulberry and cheese fruit, is the product of a tree from the coffee family. It resembles a fleshy pinecone with light green skin. The flesh inside is firm and white with brown seeds.

Fresh noni fruit carries an acrid scent somewhat like vomit. This is why in its native region of Southeast Asia, it is considered a “starvation fruit”, and is most often consumed in times of desperation.

But some cultures in the region have embraced this odd fruit and use it frequently both cooked and raw. In the latter case, it has a pungent flavor reminiscent of Limburger cheese. This flavor is somewhat muted with cooking, which also gives the hard flesh a softer, more appealing texture.

Pears come in a variety of colors, from solid tan to deep purple crimson. Somewhere in that range is the very popular green pear.

The green anjou is the most common in this hue, but the concord is also widely available. Both have a subtly sweet flavor with notes of lime.

Like green apples, these pears tend to retain their firmer texture during cooking and are a popular choice for pies and other baked goods. Of course, green pears are also delicious as a fresh snack.

Cucamelons, also known as Mexican sour cucumbers or sour gherkins, may just be the most adorable green fruit in the world. Related to melons and cucumbers, these grape-sized fruits look like miniature watermelons.

The thin green skin with light green stripes hides translucent green flesh packed with tiny seeds. The flavor is most like that of the closely related cucumber, but with a sour bend.

These tiny melons hail from Mexico and Central America. They are typically eaten raw or pickled. They can also be used in salsa and as a flavoring and adorable garnish for cocktails.

While there are many varieties of green apples out there, the Granny Smith cultivator is the most iconic. This variety was propagated by Maria Ann Smith (known as Granny Smith in her later years) in Australia in 1868.

The Granny Smith, also known simply as “green apple”, is famous for its tart, acidic flavor and firm, crisp flesh. It keeps its structure well when cooked, making it a favorite for baking and pie fillings.

Other green apple cultivators that are worth mentioning include Newton Pippin, Shamrock, Smeralda, and Mutsu.