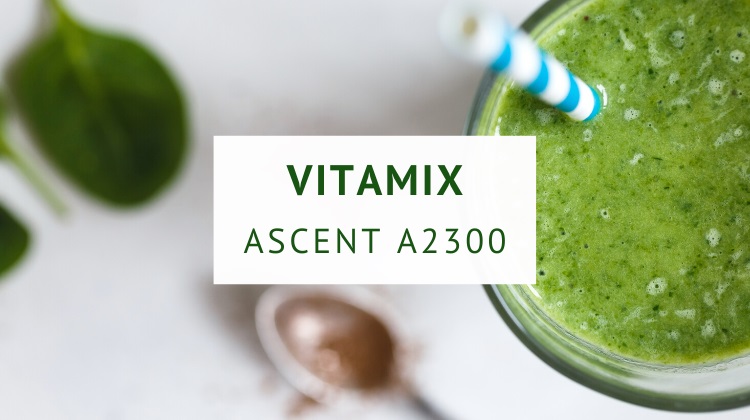 The Vitamix Ascent A2300 is a powerful and versatile blender in the popular Ascent series. It is, in fact, the entry model in that series, but don’t let that fool you.

The Ascent A2300 is the perfect choice for those looking for a good quality Vitamix blender that not only performs well but is also reasonably affordable.

I’ve given this blender a good test run, and in this review, I am going to share with you why I think this may be a good blender for you.

You can buy the Vitamix A2300 on Amazon.

If you’re unfamiliar with the Vitamix Ascent series, it’s a line of blenders that not only deliver excellent performance (like all Vitamix blenders) but also offer state-of-the-art technology and features. They also look different from the classic Vitamix blenders, with fancy touch screens and controls.

For example, containers in the Ascent series have wireless connectivity, which means the blender can automatically adjust blending times based on the ingredients. Ascent blenders also have built-in timers, digital as well as programmable.

I’ve said before on this website that it’s taken me some time to get used to these modern blenders, as I’ve always been such a fan of the simplicity and the performance of the classic Vitamix blenders. But I can certainly now see how fantastic these blenders are, so much so that I declare the Vitamix Ascent A3500 as my current favorite blender.

As mentioned, the A2300 is the entry-level blender in this range. It isn’t a cheap blender, though, because it still offers these high-tech Ascent features. But there are some differences, which I will discuss in the rest of this review.

Here are three great features of the Vitamix A2300 that make this blender stand out in the world of professional home blending.

These features are on top of the standard Ascent features, like built-in wireless connectivity and self-detect technology.

The Ascent A2300 offers variable speed control, a super handy feature that allows you to prepare smoothies and other recipes with greater precision. This feature basically gives you full control over the texture you want to achieve.

The pulse feature also works perfectly with the variable speed control concept. Pulsing allows you to process ingredients quickly before the actual blending process. For example, you can use the pulse setting to quickly chop vegetables in smaller pieces rather than liquefying them, which is great for soups.

Want to know more about the pulse feature? Check out my article where I explain how a pulse button on a blender can be super useful.

On top of the variable speed control, the Vitamix A2300 also has a built-in digital timer, which removes much of the guesswork with manual blending.

Simply set it to how many minutes you want to blend something, and the A2300 will take care of it, leaving you with a blend with the texture you want.

I find that this is super useful when creating recipes that require a longer blending process, such as hot soups.

I’ve always liked the straightforward design of the traditional Vitamix blenders, such as my all-time favorite classic blender, the Vitamix 5200.

But as I mentioned above, I’ve learned to appreciate the modern look and feel of the Ascent series, and the A2300 fits that bill perfectly.

It simply has great looks. Not just modern, high-tech looks, but also the looks of a super robust mean machine.

What I particularly like about the A2300 (compared to the A3500, for example) is that it still has a manual switch button, like the traditional blenders. I’m just a bit of a sucker for old-fashioned buttons and switches!

Other important A2300 features to mention:

The biggest difference is that the A2500 comes with three program settings, for smoothies, hot soups, and frozen desserts. This means that all you need to do is choose the correct settings, and the blender will do its magic to create the perfect blend. This is not only super convenient, but it also creates consistency, which is important when blending.

The A2300 doesn’t come with any program settings. I must say that these program settings are super helpful if you regularly create the same types of recipes, but otherwise, it’s OK not to have these settings. A bit more manual (guess)work, but it’s not a deal-breaker by any means.

Next, let’s have a look at the A2300 versus the A3500, which is currently the most expensive model in the Ascent series.

The top feature of the Ascent A3500 is the five program settings, for smoothies, hot soups, frozen desserts, dips and spreads, and self-cleaning.

As mentioned, the A2300 doesn’t have program settings. So if you’re looking for maximum convenience and consistency, the Ascent A3500 is definitely a good choice if you have the budget available.

Another core difference is that the A3500 has touchscreen controls rather than buttons and switches. This gives the A3500 a more modern look, but ultimately this is a personal preference, not so much a quality difference.

A third difference is that the A3500 has a programmable countdown timer, which allows you to pre-set the length of your blend, after which it will turn the machine off automatically.

If you would like to learn more about the Ascent A3500, check out my Vitamix Ascent A3500 review.

But there are two things I want to point out:

There you have it, my review of the Vitamix Ascent A2300.

It’s a blender I would highly recommend to anyone who wants to take blending seriously and is planning on using it on a regular basis.

Smoothies, hot soups, baby food, dressings, sauces, dips, and desserts, the Vitamix Ascent 2300 can prepare all these things for you without issues.