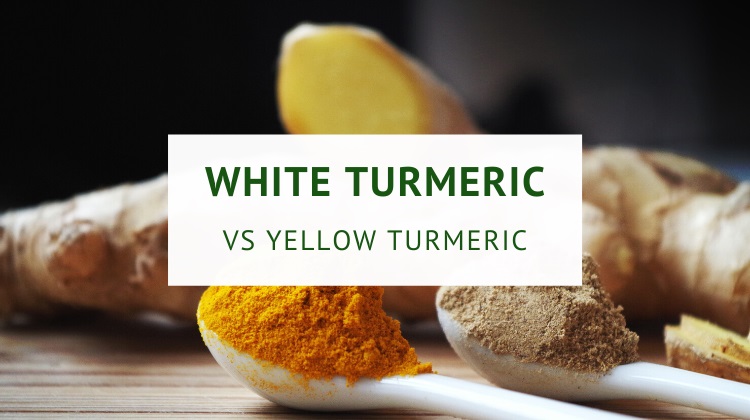 Turmeric is not typically on top of people’s grocery shopping lists, yet this spice is very diverse and offers great health benefits.

I must confess, until recently I had never really cooked any meals with turmeric as an ingredient. Until I stumbled upon an interesting recipe that had turmeric in it. Since that moment I’ve been happily experimenting with turmeric and it has slowly become one of my favorite herbs.

Did you know that there is white turmeric and yellow turmeric? Although they look quite the same (apart from the color of course), there are actually quite some differences between the two.

So let’s dive a little deeper into turmeric, because there’s a lot more to this exciting herb than just spicing up a delicious curry.

When recipes refer to turmeric, this is usually yellow turmeric as it’s the most common of the two. Many people aren’t aware that white turmeric even exists.

Both yellow and white turmeric are members of the ginger family but there are some differences between the two. White turmeric is often referred to as Amba Haldi, which is the Hindi name for this spice.

Native to southwest India, yellow turmeric is the root of the Curcuma longa plant. It has a brown/yellow skin and has orange/yellow flesh. It is often referred to as “Indian saffron”.

Yellow turmeric smells a bit like a mix of ginger and orange with a somewhat peppery and bitter flavor. The yellow color is caused by the high levels of curcumin (see further below) in turmeric.

Yellow turmeric is mostly known in powder form. The powder is created by boiling, drying, and grinding the root into an orange and yellow colored powder.

Be careful when using yellow turmeric (especially the powder form), as it can easily cause stains on your clothes!

White turmeric has lighter flesh and its flavor is very similar to that of ginger, but with a more bitter aftertaste.

Although white turmeric nowadays is rarely used anymore as a spice and often replaced by ginger, it is still used in Asian cuisine. In Indonesia, white turmeric powder is often added to curry dishes.

Cooking with turmeric can be quite challenging, especially if you haven’t used it much before. Turmeric has a very strong flavor so you need to be sure when to use it and also how much.

Another question is also whether to use fresh or dried turmeric. As with anything, fresh is always best, as this way you’ll be able to better enjoy the nutritional benefits.

Dried or ground turmeric is of course a bit easier to use. No need to cut anything, just apply it to whatever dish you’re preparing. The drawback is that dried turmeric can lose a bit of its flavor and nutritional content.

I typically use fresh turmeric for green smoothies, and let my blender mix it up nicely with other fruits and vegetables. I like to use dried turmeric (powder) to marinade meat, together with other ingredients.

I love cooking different meals every day and using turmeric, or other spices and herbs, is often a trial and error process. And the more you experiment, the more you’ll learn about what works and what doesn’t work so well.

Another one of my favorites is to add dried turmeric to rice, just to add some color and mild flavor to it. Works great!

Be sure to read my article about the ingredients and effectiveness of turmeric and curcumin supplements so you can decide which ones are best for you.

One of the most important elements of turmeric is curcumin. The terms turmeric and curcumin often get mixed up even though they are two different things.

Curcumin is the most beneficial compound in turmeric and has been used as a traditional herbal medicine for many centuries, mainly in India and China.

It is curcumin that has made turmeric so well-known and popular in Asian countries. Western medicine has also slowly been studying the positive effects of turmeric and curcumin on our health.

Turmeric root contains around 2-5% curcumin. So if you’re using turmeric powder purely for its health benefits, you would need to consume quite a large amount of powder to make the most of it.

It’s more efficient in that case to use a curcumin extract rather than consuming turmeric powder.

What Are Some of the Benefits of Curcumin?

While not all of the health benefits of curcumin have been clinically proven, this compound has been known to reduce chronic pain and inflammation, among other benefits.

Studies have also shown that curcumin can be effective in managing depression symptoms. Curcumin helps to increase the serotonin and dopamine levels in the brain, known as “feel good” neurotransmitters.

It must be pointed out that studies have shown that taking large doses of turmeric or curcumin for a longer period of time can have side effects, such as vomiting, nausea and diarrhea.

How to Store Turmeric

Fresh turmeric can basically be treated the same was as ginger. If you buy a large amount of turmeric and you won’t be using all of it in the short term, you can easily freeze it.

Simply cut the roots to smaller sizes and leave them in the freezer.

Turmeric won’t lose much (if anything at all) of its nutritional or medicinal properties. I’m actually not sure how long you can keep it frozen, but I’ve had turmeric frozen for more than 2 months and it was still good to use.

For shorter term use, you can simply put turmeric in an airtight container or plastic bag and keep it in the fridge for max 2 weeks.

Hopefully this post has encouraged you to start experimenting with this very tasty herb. White and yellow turmeric offer some interesting health benefits and there are many different ways to add it to your diet.

As a green smoothie fan, I love adding small doses of turmeric (and ginger too!) to my green smoothies. It’s a quick and easy way to enjoy the benefits.

Turmeric can also be used as a powerful ingredient in tea. I found this delicious turmeric tea recipe, with turmeric, ginger, black pepper and honey. Works great when you have a bad cold or flu!

You may also like:
>> Discover rooibos tea.
>> Discover the spice saffron.
>> Guide to growing ginger at home.
Pin for later! 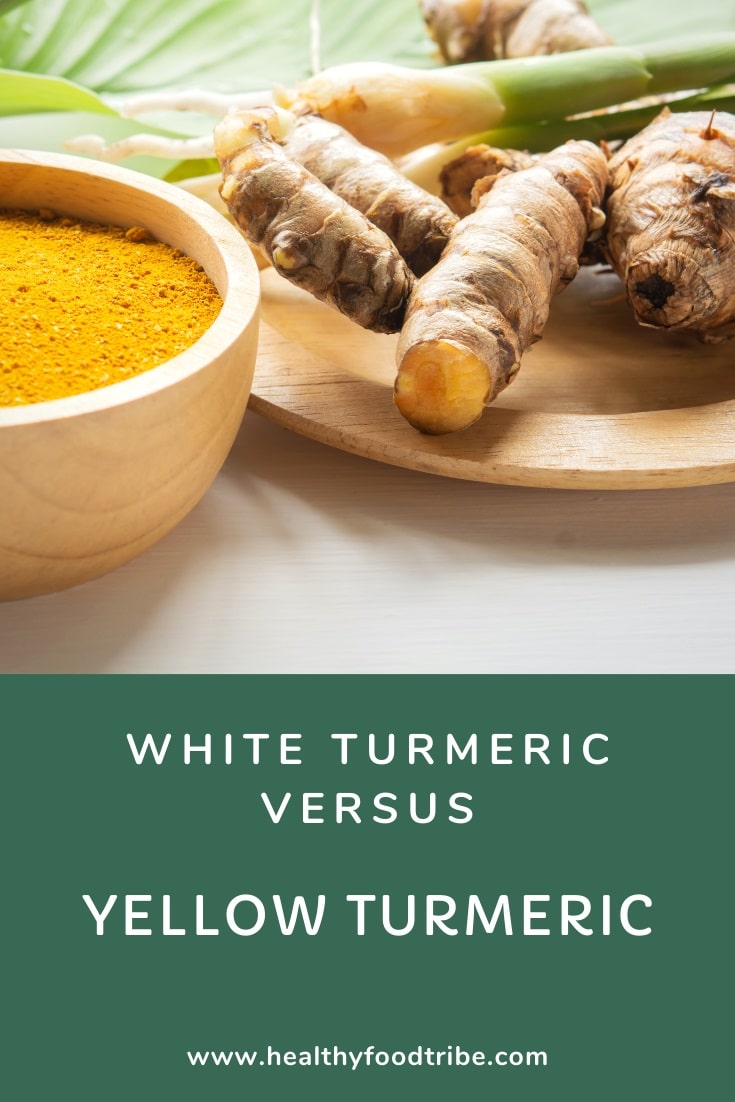 14 Comments
Leave a Comment Cancel reply
Welcome to Healthy Food Tribe!
My name is Donna and with my blog I hope to offer you lots of tips and information about food, smoothies, kitchen equipment, and recipes.