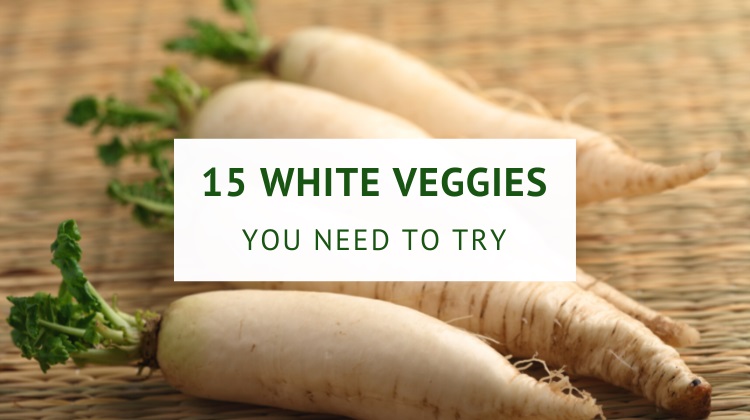 A list with fifteen white vegetables from around the world, each with unique shapes, flavors, and nutritional profiles.

Colorful veggies get a lot of hype for their nutritional value and intense flavors, but white vegetables deserve just as much attention.

These pale veggies contain a host of nutrients you won’t always find in their more colorful counterparts. Plus, they tend to have a more neutral flavor that makes them easier to use in a variety of situations and recipes.

Keep reading, as I have listed fifteen of the whitest vegetables that are worth adding to your plate.

In alphabetical order, here are fifteen white veggies from around the world, including tips on how best to prepare and serve them.

To kick off this list, let’s start by taking a look at one of the lesser-known white vegetables, arracacha. This relative of the carrot has a similar elongated shape but comes in a hue closer to that of parsnip.

Once the dirt is cleaned away, you’ll find pale white skin on the tuber of an arracacha. Inside, the starchy flesh ranges from cream to yellow. Like carrots, they can be eaten raw or cooked.

Arracachas are native to South America, where they are frequently prepared in many of the same ways as potatoes. When boiled, they take on a pleasingly mild flavor reminiscent of celery, cabbage, or rooted chestnuts. They are most commonly served roasted, mashed, or as a pureed soup.

The white cultivator of the cremini mushroom is one of the most widely consumed mushrooms in the world. And for good reason.

Not only are these popular shrooms inexpensive, but they have a fabulously neutral flavor that allows them to take on the taste of whatever sauce they’re cooked in.

The button mushroom is one of many mushrooms you can eat. Check out my list of edible mushrooms for more delicious mushrooms to add to your recipes.

As cauliflower develops, farmers bind the large outer leaves to cover the tender blooms inside. This prevents the head of the cauliflower from getting any sun, which prevents the development of chlorophyll. This is a technique similar to the one used to create white asparagus (more on this below).

White cauliflower is prized for its neutral flavor and high fiber content. It can be eaten raw, steamed, riced, or roasted.

Also known as white radishes, daikon radishes are native to East Asia and get their name from the Japanese word for “big root”. Unlike traditional radishes that form pink or red tubers, these ones have stark white skin with green tops.

Where your typical radish has a peppery bite, these paler versions are mild and sweet. They offer plenty of vitamin C and potassium and make a healthy snack or crunchy addition to many dishes.

Across the globe, you’ll find daikon used raw in salads and to top stir-fries and cold soups. It can also be pickled or cooked. Daikons take on a potato-like role when steamed or sauteed and offer a mild flavor and soft, starchy texture.

Garlic, one of the most popular members of the allium family next to onions, is well known for its intense flavor. That flavor is thanks to the high organosulfur content.

When eaten raw, garlic has a pungent, sticky, spicy flavor that causes bad breath, and, if you eat enough, body odor. This flavor is reduced during cooking and takes on a sweeter vibe. But it is still nothing like the neutral flavor of most white veggies.

Most varieties of garlic have that popular creamy white coloring, though they can be more on the green or blue side if grown in acidic conditions. Chesnok garlic is reddish-purple thanks to flavonoids specific to this variety. Meanwhile, black garlic is actually just white garlic that has been aged in low heat without moisture.

The Jerusalem artichoke is neither native to Jerusalem nor a type of artichoke. It is, in fact, the root of a specific species of sunflower native to North America. There is some debate over where this name came from, but the prevailing theory is that it was poorly adapted from the Italian word “gerisole”, which means sunflower (which is a distant relative of the artichoke plant).

A Jerusalem artichoke looks like ginger root, with tan papery skin divided by knobs and lines. Inside that skin is white flesh that is high in inulin, a different kind of carbohydrate than starch. This gives them a crisp, jicama-like texture when eaten raw and a soft, almost mushy texture when boiled.

Inulin cannot be broken down by the human digestive system, but rather is consumed by beneficial bacteria in the gut. While Jerusalem artichokes make a healthy food in small doses, too much can lead to excess gas and pain. Most often these vegetables are cultivated for use as an inulin additive in food manufacturing.

Jicama, a distant relative of the pea, is a vine native to Mexico. The word is also used to describe the tuberous root commonly eaten as a vegetable and also known as a Mexican turnip.

This vegetable does resemble a turnip in shape, but it has a light tan, papery skin, and less-dense flesh. This stark white flesh has a unique texture, like an unripe pear, but without any juice. The flavor is subtly sweet and starchy, verging on nonexistent.

Jicama is typically eaten raw, especially with dips. In Mexico, it is often prepared with salt, lime, and chili powder. It can also be used in salsa to add body and texture.

Jicama is a vegetable that works well with picky eaters. Check out my list of best-tasting vegetables for more veggies that are easy to serve.

White kohlrabi is a relative of broccoli and cauliflower. While one of its common names is German turnip, this bulbous vegetable is not a root, but an overgrown stem.

The large white bulb (which also comes in purple) has a flavor reminiscent of a broccoli stem, but slightly sweeter. Young kohlrabis are somewhat juicy with a texture more reminiscent of an apple, but they lack the sweetness of more mature forms.

Two thick layers of skin surround the tender flesh inside the bulb and must be removed before consumption. From here, the bulb can be sliced and used raw in salads or steamed, roasted, mashed, or fried, similar to cauliflower.

Somewhere between parsley and carrots lies the parsnip. This native of Eurasia has leaves resembling the former and a long white taproot resembling the latter.

The flavor is also somewhere in between, with the sweetness of a carrot, the bitter earthiness of parsley, and a starchiness that’s closer to the texture of a potato.

Parsnips are used in many of the same ways as carrots and are a perfect choice for dishes that would benefit from the extra sweetness they bring. They are delicious when roasted, steamed, and fried.

Possibly the most popular of all white vegetables is the potato. True, these tubers come in a variety of shades from purple to yellow, but the white flesh of the russet will always represent the quintessential potato.

These starchy veggies have been cultivated by humans for thousands of years. They were first domesticated in Peru and spread throughout the Americas long before Europeans made landfall. From there, the potato spread across the globe to become a staple food in almost every culture.

Much of the popularity of the potato is thanks to its high starch content (read: high-calorie content) and ease of storage. It also helps that this white veggie can be used in a variety of ways. It can be diced and sauteed, steamed and mashed, or baked whole and topped with all your favorite fixings.

Taro is a starchy vegetable native to Asia and very popular in the Caribbean and Hawaii. It is harvested from the gorgeous, elephant-eared, herbaceous plant of the same name. Interestingly, taro is not a tuber or root, but a corm; a special underground storage organ that’s part of the stem of the plant.

To safely consume taro, it must be cooked to neutralize the toxic levels of calcium oxalate found in the plant. Taro has a mild nutty flavor and a starchy, potato-like texture. The brown skin should be removed before cooking to expose the creamy white flesh beneath.

Taro is prepared like potatoes and can similarly be mashed, roasted, turned into chips, or pulverized with water to create poi.

Turnips come in many varieties, some with pure white flesh and others with white flesh capped in green or purple where the sun hits. All have a spicy, radish-like flavor when raw that mellows to sweet and nutty when cooked.

Like parsnips, the outer skin must be removed before consumption. The inside flesh is velvety and smooth when boiled and crisp when raw.

And like other root veggies, these pale fruits can be prepared in a number of ways, including sauteing, roasting, and mashing.

Turnip also comes in a purple variety. Check out my list of purple vegetables for more veggies with that beautiful bright color.

To make these ghostly spears, farmers prevent them from getting any sunlight. This is done by covering the asparagus with dirt or black plastic as it grows. Without sunlight, the plants never develop chlorophyll, so they don’t turn green.

Considered a delicacy in Germany, white asparagus has a milder but more bitter flavor compared to traditional types. It also has a thicker outer skin which must be peeled away before cooking. These pale spears can be prepared the same way as other varieties but are best enjoyed boiled in an immersion of water, butter, lemon juice, and salt.

Corn comes in a variety of colors, from bedazzled Indian corn to the many popular types of yellow corn.

One that often gets overlooked is white corn. This cultivator, which is lower in beta carotene than yellow varieties, is just as sweet and tender but offers a different hue to add some variety to your plate.

White corn was among the first types cultivated by the Native Americans. They used the crop in soups and to make flour for bread and tortillas.

While far less popular than purple eggplant, it is the white variety of this vegetable that gave it its name. The small round cultivators with ivory skin look very much like a chicken egg growing in the garden.

Today, white eggplants come in many varieties (though not nearly as many as their violet cousins). Some are long and skinny, while others tend to be round or oblong. Compared to purple varieties, they taste less bitter and have creamier, denser flesh.

You can prepare white eggplant in all the same ways you would use the more common cultivators. This includes sauteing, roasting, breading, and frying. However you prepare them, white eggplant has a lot to offer and makes a great addition to various meals.