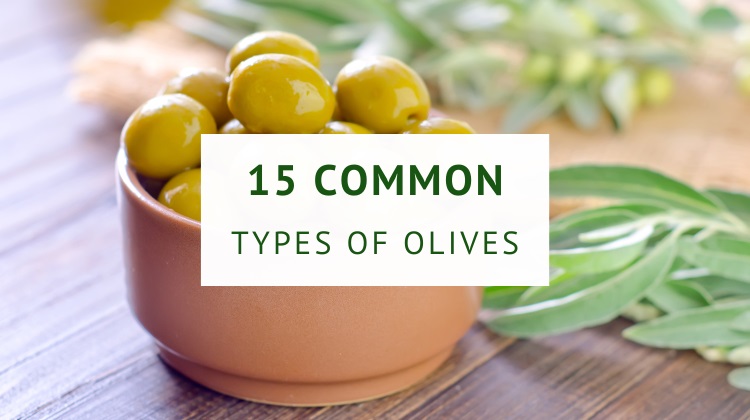 An overview of 15 of the most common olive varieties to inspire you to try some of them out in your recipes or as a snack.

Did you know that there are hundreds of different varieties of olives and olive trees worldwide? Olives are certainly not for everyone, but my appreciation for this high-fat fruit has grown to a point where I try to eat them almost daily.

Over the years, I’ve slowly acquired a taste for olives, so much so that I often even eat them as a quick snack in the afternoon. I also regularly add olives to my meals and salads.

Here are 15 different types of olives from around the world.

Some of the below olives are easy to find in grocery stores, but others require a bit more research to locate.

Native to a town in Sicily in southern Italy that goes by the same name, the Castelvetrano olive has a recognizable green color.

With their somewhat mild flavor, Castelvetrano olives are one of the more popular types of olives and are surprisingly pleasant to eat as a snack.

Firm on the outside but smooth and soft on the inside, the round, medium-sized Castelvetrano olive is often served on cheese platters, in Italian antipasti dishes, and Mediterranean-style salads.

As tasty as they are, an important reason why Castelvetrano olives are cultivated is because of the production of olive oil.

Native to a town in the province of Foggia in the Puglia region of Italy that goes by the same name, the Cerignola olive is a large-sized olive available in both green and black color.

Because of their size, Cerignola olives are often stuffed with other ingredients and do well on cheese platters or as an appetizer. They have a somewhat fruity and buttery taste.

The French Niçoise olive is a tasty, dark brown or black olive, often used in salads or served as an aperitif in the southern France region.

This type of olive is picked when the fruit is at a ripe stage, giving it a dark color. After harvesting, they are cured in brine before being packed and sold for consumption.

This type of olive is best known as the core ingredient in salade niçoise, a traditional salad from the French city of Nice, featuring Niçoise olives, tomatoes, hard-boiled eggs, and tuna or anchovies.

Named after a coastal city in central Italy between Rome and Naples, the Gaeta olive is a ripe, dark-colored type of olive with mild yet pleasant flavors.

Gaeta olives are typically dry-cured or brine-cured and work amazingly well in combination with cheese, in salads, or as snacks.

Also called Taggiasca olives, the Ligurian olive originates from the Liguria region in northwest Italy, close to the border with France.

It’s a small, brine-cured, usually dark brown colored olive with a relatively strong flavor, often enhanced with herbs that are added during the curing process.

The Picholine is a salt-brine cured French olive, produced for consumption as well as for olive oil.

It’s a pretty, green-colored olive with a full and somewhat salty flavor that can easily be consumed as a savory snack or in cheese and antipasto platters.

While the Picholine olive is native to France, it has outgrown its home country and expanded to other parts of the world.

The Alfonso olive is a bit unique in this list of (mostly European) olive varieties in the sense that it originates in Chile.

They are quite large in size with a bright purple color and have a soft and somewhat juicy texture.

The Mission olive is grown in California, brought there by missionaries in the 18th and 19th century, which explains the name.

It’s a small, light-green olive with a relatively firm texture, produced for human consumption as well as for olive oil.

Originally grown in the Catalonia region in Spain, the Arbequina olive is one of the most cultivated olives in the world.

Arbequina olives are now grown in many other parts of the world, such as South America, northern Africa, and even Australia.

It’s a small and firm, usually brown or green-colored olive with a mild flavor, but mainly used for olive oil production.

Native to Greece, Kalamata olives are another popular variety of olives. Also spelled Calamata and often referred to as “Greek olives”, Kalamata olives originate from a Greek city that goes by the same name.

Kalamata olives have been grown and eaten for centuries in the Kalamata region, the second largest city of the Greek peninsula of Peloponnese.

Ripe Kalamata olives are deep purple and cannot be picked when they are still green. They are also bigger and have a more rectangular shape than other common olives. They have a somewhat salty and tangy taste and a smooth and pleasing texture.

The small-sized Beldi olive originates from Morocco in northern Africa. It’s a dark-colored, dry-cured type of olive with a potent and somewhat fruity flavor.

The chewy texture, in combination with the pleasant flavor, makes the Beldi an excellent table olive, served in salads or as appetizer snacks.

Harvested as both green and black, the Amfissa olive is quite a popular Greek olive grown exclusively in regions of Central Greece.

The young green Amfissa olive is small and round in shape with a firm texture and a buttery, citrus-like flavor.

The Nyon is an authentic French olive originally grown in the Provence region in southeast France.

This small, dark-colored type of olive is dry or oil-cured, and has a pleasantly bitter taste with a gentle texture. In short, the Nyon olive has all the characteristics of the perfect appetizer!

Often served as tapas, the full-rounded, green Gordal olive is another Spanish olive, primarily grown in Andalusia in the south of Spain.

Gordal means “fat one”, which seems like a really fitting name for this proud, firm, rich, and tasty olive!

Similar to the Gordal, the Manzanilla olive is another Spanish green or black olive that is first lye cured (see below) and then packed in brine.

The Manzanilla olive (or Manzanillo) is one of the most common types of olives in Spain, used both as a fruity table olive and for olive oil production.

Let’s go through some interesting facts and misconceptions about olives.

Where Are Olives Most Popular?

Unsurprisingly, olives are an essential part of the Mediterranean diet, especially in countries such as Turkey, Greece, Italy, and Spain.

Countries in North Africa that border the Mediterranean Sea, such as Morocco and Egypt, also produce large amounts of olives.

Not only do these countries produce olives for the national market, but they also export large portions to other parts of the world.

Argentina in South America also produces large amounts of olives, and to a lesser extent, Mexico and California also have olive trees.

Olives are a fruit! They contain a seed, and they come from the flower of the olive tree, which classifies them as a fruit, even though they don’t taste like fruit without that typical sweetness.

To be more specific, in botany terms, olives are a type of drupe, or stone fruit, with an outer fleshy part and a single shell inside.

Olives are typically green or black. The ripeness or maturity of the olive essentially determines the color. Young, unripe olives are green, whereas ripe olives are darker colored.

The average olive goes through various stages of ripeness with different colors. They go from green to light brown, and then from red or purple to black.

Green olives typically have a firm texture with a nutty flavor, whereas ripe, dark olives are softer and have a meatier taste. It’s all about personal preferences!

How to Store Olives?

Olives are super resilient! Unopened olives can maintain their freshness and flavors for up to two years at average room temperature.

Opened olives can be kept in a refrigerator for up to one month before they start losing some of their freshness.

It’s best to store them in a glass container and, ideally, in their original liquid instead of water.

How Are Olives Produced?

Freshly picked olives are not edible due to their high oleuropein content, a polyphenolic compound that makes them taste super bitter.

So to make olives ready for consumption, they need to be processed. This curing process can happen in various ways:

Lye is a type of alkaline solution that can be used to “wash” olives, so they lose their bitterness. Once that’s done, the olives are then washed with water to remove the lye.

This is a perfectly safe curing process, although it can often leave a slight chemical taste.

It’s a pretty standard food processing method, not just for olives but also for other foods such as meat and fish.

Dry curing is typically done with ripe olives to turn them into salty-tasting, dry olives.

It’s a rather lengthy process and involves covering olives with salt for several weeks before washing them with water and then leaving them to dry for some time.

This is a simple process of curing olives. It involves soaking olives in water (and/or weak brine) and leaving them submerged for an extended period.

Note that olive farmers often use a combination of the above curing processes before making them available for consumption.