Home » Food » Herbs and Spices » What Is Saffron? 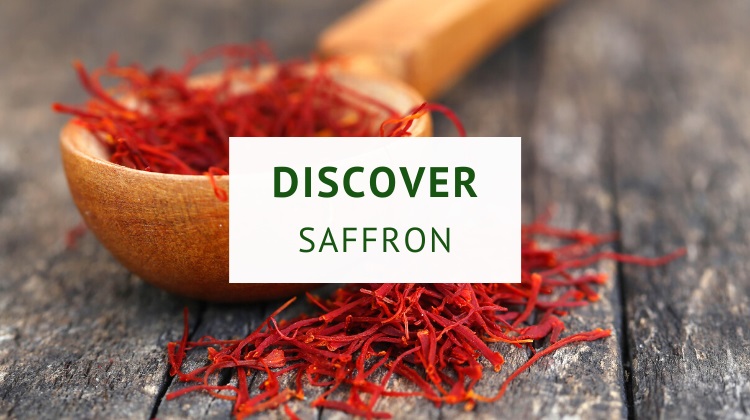 In this article I am going to share with you how I discovered Saffron, also known as the spice of happiness, and often referred to as the most expensive spice in the world.

There’s so much more to saffron than just its unique taste, pretty looks and high price tag, so let’s go on a little saffron discovery tour with me!

To explain what saffron is, let me tell you a little story about how my Spanish friend Xavier introduced me to the spice saffron.

“We will plant our saffron flags in Delhi, the heart of the Mughal empire!” This is the hero of the movie we are watching.

“Saffron? Isn’t saffron something you eat?” That’s me, being a little ignorant.

Rain is thumping against the window panes. A majestic war scene is developing on Xavier’s home theatre screen. Our Spanish friend has invited us to his place to make the most of a dull, gray, rainy Sunday.

Xavier is a historian and a gourmet. With a special penchant for ancient Asian civilizations. He has promised us a double surprise.

So far, he is keeping his word. I had no experience with Indian cinema. The epic tale of war and love that is unfolding before our eyes is really quite breathtaking. Lavish visuals and cliff-hanging style drama, Bollywood at its best.

But what’s saffron got to do with it?

The History of Saffron

“You are right, saffron is something you eat. You are going to get it for dinner,” Xavier laughs. “Beware, you risk getting addicted to it!”

The scent coming from the kitchen towards the end of the movie is proof that he is not joking. My attention is torn between the drama happening on the screen and the dining room behind our backs.

“Xavier, you are not going to drug us, are you?”

“Well… no!” he chuckles. “But there is actually scientific evidence that saffron may have some psychotropic effects!”

From India to Spain

A triumph of orange shrimps, blue mussels, red bell peppers, green peas, on top of a mound of golden rice. This is what appears on the dinner table in front of my mesmerized eyes.

I am still in India with the warrior Bajirao, but the glorious paella makes me wake up in Spain by the time I walk to the table.

At this point, I have realized that saffron has to do with yellow. The flags of the Maharati, but also the robes of Buddhist monks… I’ve just remembered that. A sacred color, the symbol of humility and sacrifice.

But… what is saffron?

“No. A violet flower. With a heart of fire.”

Our host produces a small glass jar closed with a cork stopper. Slender fiery red threads are visible inside.

“These are the stigmas, the female reproductive organs, of the Crocus Sativus. Saffron, the spice of happiness. Azafran, as we call it in Spanish. We owe it to the Moors, the Arabs who conquered Spain in the Middle Ages. They brought it along and called it az-zafaran.”

“There are 200 flowers in that little jar. That is, their stigma, each flower has only three of them. Flowers bloom only for about ten days in late autumn.”

“Many hands picked those flowers from the fields in La Mancha, the homeland of Don Quixote. And more hands plucked the threads gently from the flowers, then toasted them carefully above a fire to dry them,” Xavier explains. “Saffron is a labour of love. And the most expensive spice in the world.”

Unexpectedly, my friend Sarah, another avid foodie, speaks out: “No way! I am not eating saffron again. I prepared a “risotto alla milanese” at home last month, and we threw it all away. It tasted metallic”.

“Then you were scammed. You bought some counterfeit saffron. There are lots of fakes around. Just taste mine”.

Xavier is right. The gang around the table falls silent for quite a while. All you can hear are sighs.

From Spain to Iran

Paella is very nutritious, so there is no need for a second course. But here comes a golden pudding for dessert. Something unusual and very special.

I cannot recognize what is in it, apart from the garnish of nuts, cinnamon and rose petals. Our host is grinning and encouraging us to guess, but until he tells us we cannot make out that the mysterious substance is rice.

Not by chance: Iran produces ninety percent of all the saffron sold in the world. He shows us another little glass jar with a mysterious script printed on the label.

Where Does Saffron Really Come From?

This question has never been answered and probably never will. Saffron has been around for millennia.

They found it painted in the frescoes of Minoan palaces on the Greek Islands from the Bronze Age. But also in prehistoric paintings in caves in Iraq that date back 50.000 years.

Sumerian priests mixed it in their magic potions and Cleopatra used it as an aphrodisiac. The Mughal conquerors took it to India where it became popular as a spice and as a dye for clothes.

Ancient history is fascinating. The world was different then. So many lost kingdoms and empires.

But human beings were already traveling and trading thousands of years ago. Who was the first to grow saffron, who brought it to whom, is an open question.

What is certain is that all saffron-producing regions claim that theirs is the best in the world, and that is fine.

This video shows how saffron is grown in Iran:

After that epic dinner, I plunged into an intensive reading session of all things saffron. I found that it is not only me who has problems in describing exactly what it tastes like.

The Iranian saffron we had in the dessert was more flowery with a reminiscence of honey. The Spanish one in the paella was stronger, with a slight aftertaste of bitter.

But the truth is that it is hardly possible to describe the taste of saffron. So unmistakable and yet difficult to define. You can only try it.

There are so many rice traditional dishes with saffron in different parts of the world, because rice is neutral and brings out the spice’s nuances at its best.

Biryani rice with chicken is a favorite staple in countries like India and Pakistan. The Italian risotto alla milanese only uses a little bone marrow to enhance the taste, and Parmesan, obviously.

Stews benefit from saffron too, and not only in meat recipes. The trademark specialty in Marseille, France, is bouillabaisse, a famous fish stew, which is unthinkable without saffron.

Saffron is also a favorite with cakes and ice creams. If you have some spare time, here is a BBC vintage documentary video that shows how traditional saffron buns are made in Cornwall.

How to Use Saffron?

The red threads work their magic in minimal quantities: 3 or 4 per person are enough to change the aroma of a dish in unspeakable ways.

There are two main ways to add saffron to your recipes:

Remember that saffron likes it slow. This special spice takes its time to release its color and aroma. Unlike salt and pepper, its effect is not immediate.

Recipes that boil or stew longer make the most out of saffron.

The nutritional profile of saffron is not really relevant, since you use the red gold in fractions of a gram. It gives you flavor, not nourishment.

And yet, I was curious, so I looked it up all the same.

The FoodData Central of the U.S. Department of Agriculture has a helpful web search function. If you search for saffron there, you will discover something interesting. The query returns not only saffron the spice, but also a long series of preparations that make use of it. They are all marked “Branded”.

At the moment, there are more than 140 ready-to-eat products that use saffron. With all their nutritional values. Nice.

The list of scientific studies on the medicinal properties of saffron is quite impressive. The health problems that can be treated with the golden spice is very varied. Here are but a few:

How to Recognize Fake Saffron?

Impressed by Xavier’s collection, I did some research. It left me totally confused by the enormous differences in price between saffron products on offer around the world.

The most expensive reference I found was from this article in The Telegraph which mentions that you can buy a 0.2g packet from Fortnum & Mason for £15, which amounts to £7,500 for 100g.

Then I learnt that the super-extra-top quality saffron discards the white and yellow part of the stigma and keeps only the deep red one, the most aromatic. Color and flavor are stellar, but the quantity of material is even more reduced and the price shoots through the ceiling.

The Iranians call this extra quality Sargol or Negin.

In any case, it’s big business. No wonder there are so many fakes around. I put together this little table to help you avoid a rip-off if you plan to shop for saffron:

I also found this video shot in a saffron shop in India, useful to learn what a fake looks like.

And here is a similar test with water, demonstrated by an Australian importer of Kashmiri and Iranian saffron.

So, do I thinks saffron is worth the money?

Yes, I do. I still feel the taste of that dinner. And I plan to do some saffron shopping too.

The price is tall, for sure, but let’s face it: none of us will ever buy a pound of saffron. Not even 100 grams. A one-gram vial contains dozens of threads, and since you use only a few at a time, a portion of yellow saffron rice is not crazily expensive.

Above all, the whole story is simply too fascinating for me. Exotic and rich, like the taste of saffron.