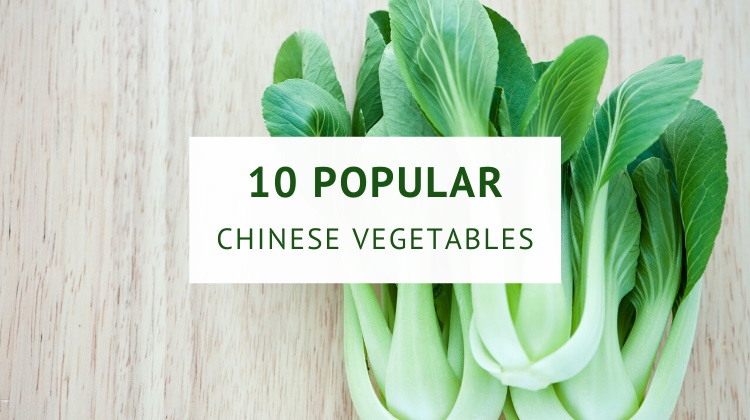 A list with ten of the most popular Chinese vegetables that can be prepared and consumed in many different ways.

In Chinese cuisine, veggies are very dominant, and even the Americanized version of Chinese food is often bursting with a good variety of greens. That should come as no surprise, given the extensive collection of native vegetables the land has to offer.

Today, I’m going to share with you ten popular and tasty Chinese vegetables that originated in the country and feature heavily in local dishes.

In alphabetical order, here are ten unique Chinese veggies, including tips on preparing and serving them.

Bamboo shoots are the young sprouts of new bamboo plants. They are harvested shortly after they push through the soil in many Asian countries.

In China, shoots of giant timber bamboo, Bambusa oldhamii, are most commonly used. Like all bamboo, these shoots must be heat processed to remove toxins before they can be consumed. These young shoots are crisp and sweet, while older sprouts take on an unappealing acrid flavor.

Bamboo shoots can be prepared in several ways, including canning, pickling, or boiling, and are often cooked with beef, pork, or chicken. They are also added to veggie-heavy stir fries and used in soups and to make broth. For vegetables, bamboo shoots are impressively high in protein.

Bok choy, also known as pok choi and pak choi, is a type of Chinese cabbage used widely in native cuisine. Unlike most cabbage varieties, this type doesn’t form heads but rather sprouts billowing leaves from a bulbous base.

Both the leaves and the bulb have a mild flavor reminiscent of spinach or water chestnuts with peppery undertones. The dark leaves have a more pronounced flavor than the stark white bulb and stalks.

This leafy green originated about 3,500 years ago in the Yangtze River region of China. The thick leaves and crunchy stems served as the first base for kimchi and were widely used in cooking and ancient Chinese medicine. Bok choy, which is now fairly common across the Northern Hemisphere, was not introduced to Europe and North America until the 1900s.

Bok choy is worth including in a variety of dishes. Locally, it is often used in soups, ramen, and stir-fries. Personally, I love bok choy, and I have it included in my list of favorite green vegetables.

Also known as gai lan, Chinese kale, and jie lan, Chinese broccoli looks more like leafy asparagus than the broccoli most are familiar with. It has long stalks, thin leaves, and florets similar to broccoli but much fewer in number. The taste is also similar, but Chinese broccoli tends to have a stronger, more bitter flavor.

Chinese broccoli, a type of cole crop, likely arrived in China via Portuguese travelers around 600 AD. From there, it was locally cultivated and selectively bred, eventually giving rise to the gai lan we know today. Broccolini, which is becoming more popular in Western grocers, is a hybrid between broccoli and Chinese broccoli.

Chinese broccoli can be used raw in salads, steamed, sauteed, or cooked in soups. Also worth noting is that this deep green veggie has a higher calcium content than most plant-based foods.

The first eggplant varieties were small, round, and white. These originated deep in India but slowly made their way throughout the region during ancient times. As the eggplant spread, more varieties began to be cultivated, including the Chinese eggplant.

Today, China is the number one producer of eggplant. Their namesake cultivator is long and slender with pastel purple skin. These eggplants contain fewer bitter seeds than bulbous varieties and therefore have a sweeter taste and meatier texture.

In Chinese cuisine, eggplant is often cooked the same way as meat and makes a popular substitute when meat is not available. Its mild flavor makes it a great addition to a variety of dishes, from vegetable sautees to soups.

For more such brightly colored veggies, check out my list of purple vegetables from around the world.

Also known as silk squash or Luffa acutangula, Chinese okra is popular in the west but not as a food item. When left to mature on the vines, these delicate squash grow into large gourds. After drying, the outer shell is removed, and the natural luffa inside is utilized as a sponge.

When harvested early, the okra is thin, elongated, and ribbed. At this stage, their skin is delicate and edible. The sweet flesh inside tastes something like zucchini with a texture like silk. Chinese okra is an excellent source of vitamin A, and contains plenty of fiber, vitamin C, and minerals.

This member of the cucumber family is grown throughout Asia and is popular in Chinese cuisine. Here, it is used in various dishes, from stir fries to soups. It is especially popular in heavily sauced dishes since it so readily soaks up liquids.

Daikon radish, often referred to as winter radish, is a variety of radishes that form long, white tap roots. Different varieties take on different shapes, from slightly elongated round bulbs to thick, long roots that would make even the biggest carrots jealous.

These latter types are often used to break up compacted soil in farm fields. When used in this way, they are not typically harvested for food but tilled back into the soil for their nutrients.

Other varieties are used frequently in the culinary world. These tend to have a slightly peppery flavor that is much less intense than summer radishes. The white flesh is crispy and juicy with a satisfying crunch.

Daikon radishes can be eaten raw, pickled, or added to cooked dishes. In China, they are often used to make turnip cakes or carved into elegant edible decorations.

For more delicious and unique white veggies, check out my list of white-colored vegetables from around the world.

Mustard greens are native to India, but the first nonwild-type variety was created in China. Still known as Chinese mustard today, this cultivator has thick stocks, broad leaves, and light green coloring.

All mustard greens share a similar spicy-bitter flavor. This flavor is made more palatable by steaming, boiling, or pickling the leaves. The mustard seeds, which form following the bright yellow flowers of this plant, are used to make brown mustard.

While the flavor takes a little getting used to, it is worth including these greens in your diet. A single serving of steamed mustard leaves provides a whopping 690% of your daily value of vitamin K.

In China, tender spring mustard greens are typically used fresh or steamed in meals. Older crops are processed using salt, brines, or vinegar and added to meals as a topping.

Most cabbage we’re familiar with in the west grows in compact round heads. Napa cabbage, which originated in the Beijing region, grows upright with elongated, light green, compact leaves. Like bok choy, this green falls under the category of Chinese cabbage.

The name “napa” comes from the Japanese word nappa, which refers to any edible vegetable leaf. Not long after it became popular in China, this cabbage spread to Japan, where it is still widely used in preparing traditional Japanese dishes.

Like other cabbage varieties, napa is high in B vitamins, antioxidants, calcium, iron, and many other valuable nutrients. This cultivator is less pungent than other cabbages and has a delicate, sweet flavor.

In China, napa cabbage is eaten raw, added to stir-fries and sauteed dishes near the end of cooking, or boiled for long periods to create stews and soup bases.

Snow peas may be one of the most popular Chinese native vegetables used throughout the world. These peas grow in early spring, just as other pea varieties do. But since they are picked before maturity, they are ready earlier than other peas, potentially before the last snow, hence the name.

Snow peas are also commonly called Chinese peas, though this likely has less to do with their origins and more with their frequent use in Chinese dishes. They are closely related to snap peas, which also have an edible pod. Both are sweet with a mild flavor and crisp texture.

Snow peas can be eaten raw in salads, sauteed, steamed, or added to soups. Like eggplant, bok choy, and others on this list, they are common in both meat and veggie-heavy Chinese dishes.

Yardlong beans, also known as Chinese long beans and asparagus beans, are a unique legume with an edible pod that grows to impressive lengths. While “yard” may be a bit of an oversell, these beans do routinely grow to lengths of one-and-half feet or more.

Like green beans, they are harvested in their immature form when the pod is still soft. The seeds inside are undersized and tender. They have a similar flavor to green beans but lose that flavor quickly when boiled or steamed.

Yardlong beans are native to southern China and are now widely cultivated throughout Asia and America. To preserve the earthy, sweet taste, these beans are typically prepared by sauteing or frying, or otherwise served fresh. For logistical reasons, they are typically cut up before cooking.