Home » Kitchen Essentials » How to Make Stroopwafels With a Stroopwafel Iron 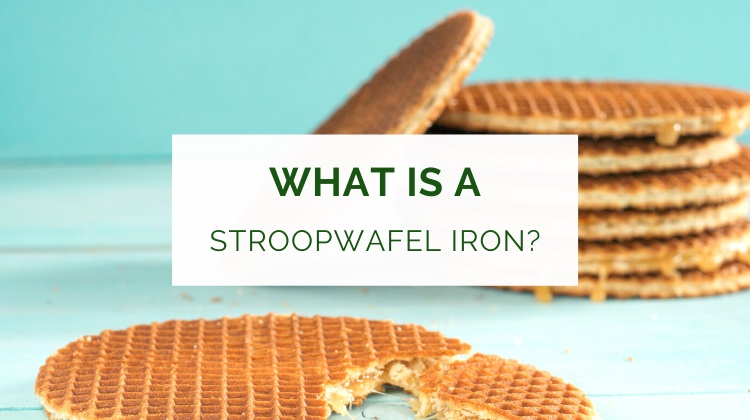 This article about stroopwafel irons carries a bit of nostalgia for me. As a child, with my Dutch heritage, I was lucky enough to be treated to stroopwafels (stroop waffles, or thin waffles) every now and then.

And today, I still happily make my very own stroopwafels, because they are just so irresistibly delicious. Not very healthy though, but it’s okay to indulge sometimes, right?

To share my enthusiasm for stroopwafels with you, I am going to explain what they are, what they are not, and what you need to prepare them in your own kitchen at home. Yum!

What Is a Stroopwafel?

Originating from The Netherlands, a stroopwafel is essentially a cookie that consists of two thin layers of baked dough that are joined by a caramel filling. The Dutch word “stroop” means syrup, and “wafel” means “waffle”.

A stroopwafel is indeed quite a straight-forward cookie. But as with so many other delicacies, it’s important to get the ingredients and process right.

And that involves the crispiness, the chewiness, the thickness, the grid pattern on the outer layers, and the flavors.

Stroopwafels were “invented” in the Dutch city of Gouda at some point in the 19th century, but nobody seems to know exactly when.

Mass factory production of stroopwafels started to take off in the 20th century across The Netherlands.

If you ever get to visit The Netherlands, chances are you’ll find stroopwafels on every street corner, that’s how popular and mainstream they are.

Unfortunately, there are lots of thin waffle products marketed and sold as stroopwafels, but in reality they aren’t authentic stroopwafels at all.

But a stroopwafel is a very specific type of wafel cookie, with its own unique shape, grid pattern, texture and ingredients.

What About the Belgian Waffle?

An authentic Dutch stroopwafel is also not the same as a typical Belgian waffle, but they do often get mixed up.

A Belgian waffle typically is much thicker than a stroopwafel, and also has a different pattern. It also doesn’t have a caramel filling on the inside.

Let’s have a look at what goes into an authentic Dutch stroopwafel, so you can make them yourself with an iron.

Note that the below ingredients for the waffles and the filling aren’t set in stone, they are guidelines only. You’re free to experiment and adjust where you believe it’s necessary.

Dough (for the waffles):

Mix the milk and yeast in a bowl and let it sit for 5 minutes. Add the egg, melted butter and sugar, and stir in the flour. Knead the mixture into a ball and allow to rise for an hour or so.

Filling (for the inside):

Place all ingredients in a saucepan and stir until boiling. Allow the mixture to cool off once the butter and sugar have dissolved.

With the dough and the filling we’ve created in the previous step, here’s how to turn them into stroopwafels with an iron:

Note that you can also choose to spread the caramel filling between two cookies, rather than slicing one open. Whatever is the easiest for you.

Characteristics of a Good Stroopwafel

What do I think are the non-negotiable characteristics of a true Dutch stroopwafel?

I say this with a bit of tongue-in-cheek of course, but I do think it’s important to get the essentials right.

What Is the Best Stroopwafel Iron?

However, if you get the ingredients and process right, with the below three kitchen appliances you can still make delicious cookies that look and taste like real stroopwafels.

This is an example of a good quality pizzelle maker that you could also use for making stroopwafels. This Chef’s Choice model has room for two 4 3/4 inch waffles to be prepared at once in less than 30 seconds.

It’s an electric appliance with baking and ready lights, and offers consistent even heating for perfect baking and non-stick easy release coating.

This makeshift stroopwafel iron also features a one-handed locking latch for that uniform thickness and a beautiful stainless steel finish that makes it look sleek and stylish on your kitchen countertop.

This CucinaPro model is another nonstick pizzelle maker which can be used to make delicious stroopwafels. It can make two cookies with different patterns at one time, each measuring 5 inches.

The thick baking plates make sure that the heat gets distributed perfectly, and the steam guard protects your hands. Also very important is the non-stick surface, which makes cleaning up super easy.

While this model is branded as a Belgian cookie iron, it’s actually very suitable for making Dutch stroopwafels. It can bake two thin and crisp waffles on high quality aluminum plates.

The cast plates extend down the side of the unit, which makes for really easy cleaning in case of any overflow.

Are you excited about stroopwafels after reading this article? Are you keen to try and make them yourself?

If you’ve never had real stroopwafels before, I recommend you buy a pack first and see if you like them. Try and find them at your local supermarket, or otherwise buy them online.

I know for a fact that not everyone likes them, mainly because of their rather unique texture. But if you do find them as delicious as I do, then it may be worth investing in a new stroopwafel iron!

7 Comments
Leave a Comment Cancel reply
Welcome to Healthy Food Tribe!
My name is Donna and with my blog I hope to offer you lots of tips and information about food, smoothies, kitchen equipment, and recipes.