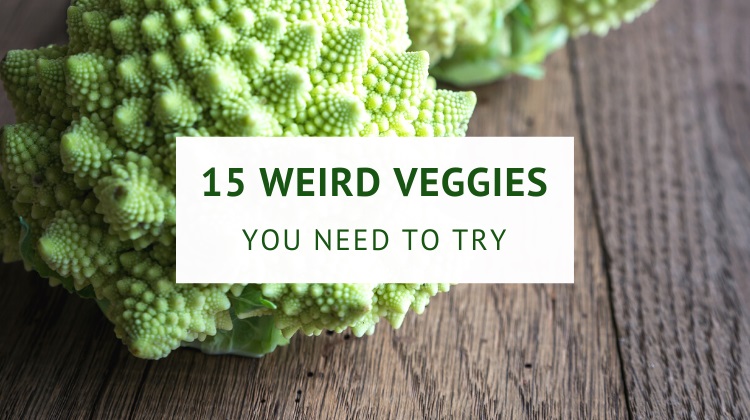 In this article, I am going to share 15 weird and unusual vegetables from around the world, each with unique shapes, flavors, and colors.

If you’ve read my list of exotic fruits, then you know I’m all about trying out new things. Why stick to bananas and apples, if there are so many unique and delicious fruits out there?

It’s no different when it comes to vegetables. I do love my spinach, kale, and broccoli, but trying out new vegetables that are a bit strange, rare, and unusual is something that always gets me excited.

The best places to find some of these unique and weird vegetables (and I don’t mean weird in a negative way at all) are at large fruit and veggie markets or at Asian grocery stores.

Here is my top 15 weird and even strange vegetables from around the world that you should try.

If there is one vegetable in this list of weird vegetables that deserves the price for best looks, it may well be the Romanesco broccoli. The spiral patterns in the florets are like an artwork, if you ask me.

The Romanesco is part of the Brassica Oleracea family, which is also home to veggies such as cabbage, broccoli, cauliflower, kale, Brussels sprouts, and collard greens.

As the name suggests, Romanesco broccoli originates from Italy and is also known as Roman cauliflower, Broccolo Romanesco, or Romanesque cauliflower.

Rich in vitamin C, vitamin K, and dietary fiber, Romanesco has a somewhat nutty and mildly sweet flavor, and can be consumed raw and cooked.

Is it ginger? Is it perhaps turmeric? Or is it a potato?

Not quite. This root vegetable is called oca, and it does look very similar to ginger, white turmeric, and potato. To make things even more confusing, oca goes by various names, such as uqa, cubio, and New Zealand yam. Its Latin name is even more exciting; Oxalis Tuberosa.

Oca is popular in New Zealand where it’s often served as a staple food. It can be served in many different ways, but it’s often treated the same as a potato, which means they taste best when roasted, cooked, or grilled.

The Oxalis Tuberosa plant originates from the Andes region in South America and was introduced to Europe and New Zealand in the 19th century, mainly as a competitor to the potato.

Read my guide to growing ginger at home if you’re keen to try that out.

Most of us will be familiar with celery (I’m a big fan), but its family member celeriac is not as well-known.

Originally from the Mediterranean, celeriac has strong flavors, and can be consumed raw and cooked. Similar to potatoes, celeriac is very versatile, and can be roasted, stewed, and added to soups and salads.

This may well be the weirdest vegetable on this list, because who would think of eating a cactus as a vegetable?

The nopal cactus is a cactus native to Mexico. The paddles of the nopal are called nopales and they are edible. Not just that, they are in fact very nutritious!

The word Nopal is a Spanish word for the Opuntia cactus family, also often referred to as prickly pears. The edible nopal pads can be eaten cooked as well as raw, and are popular in various Mexican dishes, such as salads, soups, and stews, but you can also blend them in smoothies.

Read my nopales guide with lots of information about this cactus and its edible nopal pads.

Similar to the classic potato in regards to looks and texture, jicama is a root vegetable that is mostly grown in tropical areas around the world.

Also commonly known as Mexican yam bean, or Mexican turnip, jicama is an excellent source of vitamin C and dietary fiber, and is often served up as part of salads.

The flesh of jicama is somewhat crunchy and juicy, with a slightly sweet and nutty flavor, somewhere between a potato and a pear.

Did you know that the Dutch created the orange color of carrots and that purple was in fact the original color?

While orange carrots may taste better, purple carrots do stand out as they are especially rich in powerful antioxidants, which correlates with their color.

just like normal orange carrots, purple carrots can be eaten raw, cooked, and baked, and can also be blended.

Popular as a garnish or as a side dish in restaurants, samphire is a (sea) vegetable that grows abundantly along shorelines, specifically in the United Kingdom.

Unsurprisingly, can have a somewhat fishy and salty taste when cooked, and works well in meat and seafood dishes, and also in pastas.

Most of us love a bit of sweet potato, I certainly do, but did you know there is also a purple variety?

Not only do they taste fantastic, but the bright purple color of the flesh also makes any dish immediately look so much more appealing.

Cooking purple sweet potatoes generally takes a little bit longer than cooking their white or orange counterparts, but they taste quite similar.

Be mindful that purple sweet potatoes aren’t always easy to find as they are a bit of a specialty item, and as such, they are typically a bit more expensive.

Kohlrabi is an interesting vegetable because it is part of the same family of vegetables as classics such as broccoli, cabbage, and cauliflower, but for some reason, it isn’t as popular or as well-known as most of its family members.

Granted, kohlrabi doesn’t have the best looks, but it’s a unique vegetable with an impressive enough nutritional profile. Kohlrabi is a great source of vitamin C, vitamin B6, potassium, and dietary fiber, and works well in salads and stir-fries.

Another possible reason why kohlrabi isn’t as popular is that it’s not the easiest of vegetables to process before you can consume it.

The big bulb is essentially a swollen stem which is the edible part, but only the inner part of it. The tough outer layer needs to be peeled away. The edible inner part can be consumed either raw or cooked.

I know what you’re thinking… green shrimp? That’s what I thought of when I first lay my eyes on fiddleheads, perhaps the weirdest looking vegetable I’ve ever had the pleasure of trying.

Fiddleheads are the furled fronds of the Fiddlehead fern and are harvested for use as a vegetable staple. Perhaps yhey taste a bit like asparagus.

Cooked fiddleheads are an excellent source of omega-3 and omega-6 fatty acids, and are also high in iron, dietary fiber, and antioxidants.

They can be prepared in various ways, but cooking and/or steaming properly before consumption is definitely recommended.

I know asparagus isn’t for everyone because of its bitter taste, but I love it. Add to that its incredibly rich nutritional profile, and I could literally eat asparagus every day.

But did you know there is also a white-colored version? I certainly didn’t know, until I saw a bunch in a grocery store out of town.

The taste is also very similar, although it can be said that white asparagus has a slightly milder taste.

The Thai eggplant you see there in the picture may not look like the traditional eggplant or aubergine most of us are familiar with, but they are in fact related.

Thai eggplant is the name for several varieties of eggplant used in Southeast Asian cuisines, especially in Thai and Cambodian cuisine.

They are often cooked in curry sauces, where they become softer and absorb the flavor of the sauce. Thai eggplants can also be consumed raw as part of salads or chili pastes.

I have to admit that radish has never been my favorite vegetable, but I do often incorporate them into my dishes.

With a bit of searching and hunting, the daikon variety is available around the world, but is originally native to, and most commonly used in, Southeast and East Asia.

Daikon radish can be consumed both cooked and raw in for example salads, although I prefer the softer texture when slightly cooked.

Luffa, otherwise known as Loofah, is an interesting vegetable in the sense that it is not only used as a veggie but also as a bath or kitchen sponge. Weird, right?

The luffa is a tropical, or subtropical, vine in the cucumber family, and is mostly cultivated because of its edible fruit. I say fruit, but it is generally considered to be a vegetable.

Where it gets interesting is that the fruit is often processed to remove everything except the fibrous skeleton. What’s left is a sponge-like object which can be used as a body scrub.

Popular in various Asian countries, luffas can be consumed as food when they are still green and small-sized. Also note that it can go by different names, depending on where you are.

As the name suggests, water spinach typically grows in water or moist soils.

Although its origins aren’t entirely clear, water spinach is mostly cultivated in China and Southeast Asia.

Also read:
Blue vegetables from around the world.

There is still so much to discover when it comes to fruits and vegetables, and for me, that’s a lot of fun. And I don’t just eat them, I also always try and find out more about their nutritional profiles to see what they can offer me and how they stand out.

Hopefully this article has encouraged you to go out there and try some of these unique veggies!